What Happened in Baltimore and What Can We Do? A Neighborhood’s Perspectiveby Cheryl Knott

by Cheryl Knott on January 7, 2016 with 0 comments Uncategorized 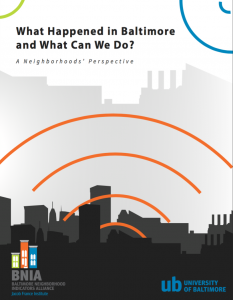 What Happened in Baltimore and What Can We Do? A Neighborhood’s Perspective offers a clear set of data-driven objectives for community organizations, non-profits, elected officials and all stakeholders to work together to eliminate disparities in neighborhoods. This report represents the synthesis of several years of work by the Baltimore Neighborhood Indicators Alliance-Jacob France Institute (BNIA-JFI) and points to 3 key goals that could serve as a common agenda to improve quality of life in every neighborhood.

When the events of April 2015 unfolded in Baltimore after the death of Freddie Gray while in police custody, many people turned to the community-based indicators in the annual Vital Signs report to better understand the neighborhood context that spawned such civil unrest. This report aims to highlight key indicators that stand as major barriers in neighborhoods and what we can do to truly achieve a more just and equitable City.

Based on both statistical analysis and community-based research, the key recommendations in the report include:

Reduce or maintain vacant and abandoned housing below 4% in every neighborhood: Vacant and abandoned buildings are an issue of environmental justice. They represent the physical vestiges of population decline and their negative consequences rest on the shoulders of the people who currently deal with that loss every single day. Based on the experience in Baltimore, nearly all communities that grew between 2000 and 2010 had vacancy rates at or below 4%. For communities with significantly higher vacancy rates, the magnitude of may seem overwhelming. Communities need to plan and focus together, with city agencies and outside resources, on the best course of action in their neighborhood to create a vision for a less-than-4%-vacancy reality.

Reduce the percentage of households traveling more than 45 minutes to get to work: The impact on urban neighborhoods of long commute times is highly detrimental to population growth. Accessibility to work and other amenities for everyone in every neighborhood is the key to regional equity in the 21st century.

BNIA-JFI annually issues Baltimore’s Vital Signs report, which tracks more than 150 indicators to take the pulse of neighborhood health and vitality. The report is available on BNIA-JFI’s website. The next edition will be released in March 2016.

BNIA-JFI also hosts an annual workshop, Baltimore Data Day, in which community leaders, nonprofit organizations, governmental entities and civic-minded “hackers” come together to analyze the latest trends in community-based data, technology and tools, and learn how other groups are using data to support and advance constructive change. This year’s workshop will be on July 22 at the University of Baltimore’s Thummel Business Center.