by Seema Iyer on April 30, 2019 with 0 comments Uncategorized 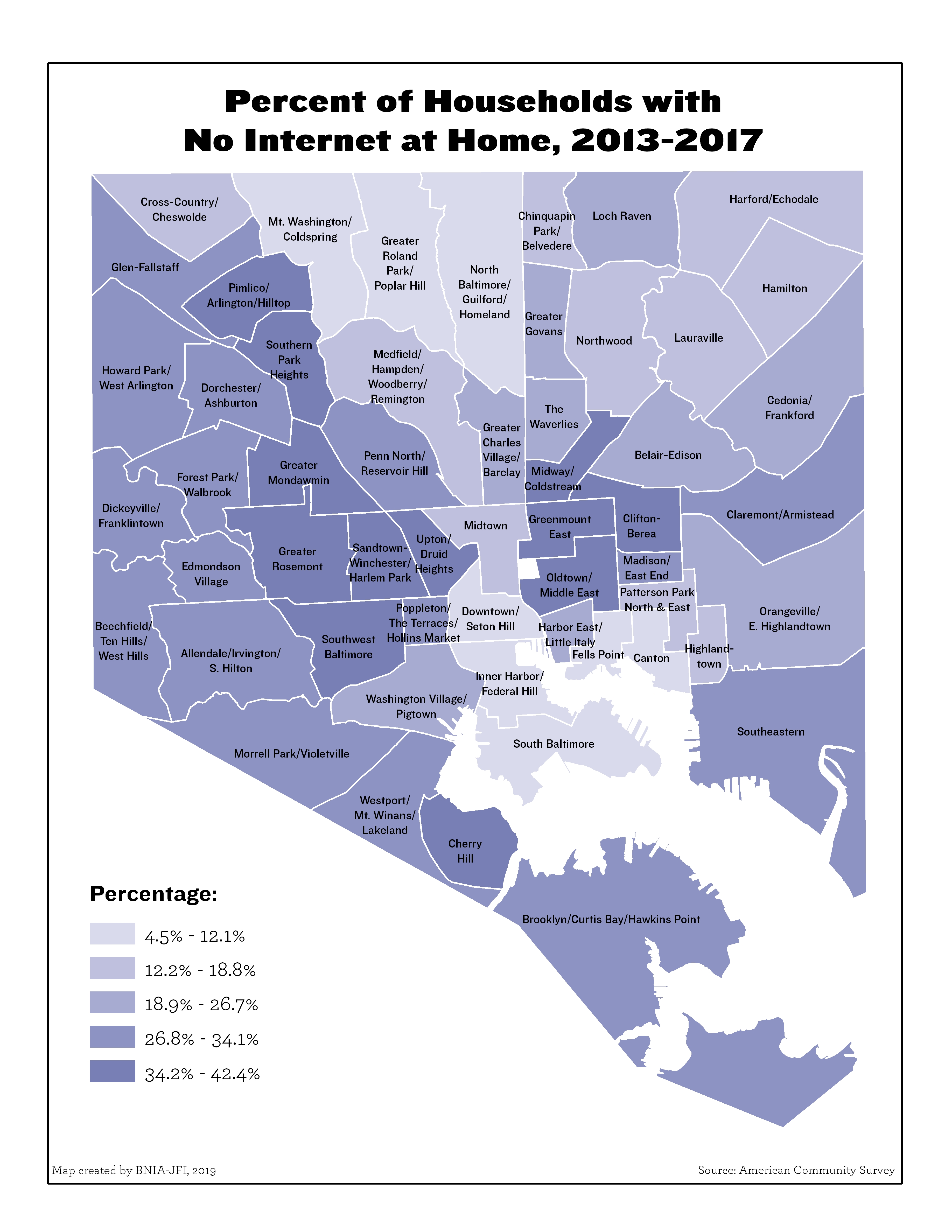 Vital Signs 17, a comprehensive statistical portrait of Baltimore and its neighborhoods, marks 17 years of continuous monitoring of community-based quality of life indicators. The latest edition of the report, published by the Baltimore Neighborhood Indicators Alliance-Jacob France Institute (BNIA-JFI), tracks more than 100 indicators that take the pulse of neighborhood health and vitality. The report, along with new indicators and several data visualization aides, is available now on BNIA-JFI’s updated website.

This year, the Vital Signs report introduces several new indicators aimed at measuring the connectedness of Baltimore’s neighborhoods to a wide variety of networks including home-based internet, the public bus system and capital markets for small business.

“Many of our indicators reflect what’s going on within our neighborhoods,” says Seema Iyer, associate director and research assistant professor for the University of Baltimore’s Jacob France Institute, home of BNIA-JFI. “But to truly understand the strengths of our communities, we needed to provide measures that show how connected our neighborhoods are in terms of digital, physical, social and financial infrastructure. Neighborhood isolation across any of these domains results in the lack of resources to communities today, tomorrow and beyond.”

The new indicators and the chapter of Vital Signs 17 that they are in include:

Every indicator in Vital Signs analyzes data provided at the Community Statistical Area (CSA) level, for which there are 55 CSAs in Baltimore. CSAs are clusters of neighborhoods organized around census tract boundaries, which are consistent statistical boundaries. Neighborhood borders don’t always fall neatly into CSAs, but CSAs represent conditions occurring within the particular neighborhoods that comprise a CSA.

Housing is the predominant land use in nearly all of Baltimore’s neighborhoods, and serves as the basis for quality of life in nearly all other aspects of communities such as health, education, local economies and safety. Yet the policies and laws that impact the development of housing have historically been established in isolation across federal, state and local governments and policymakers. To overcome diverging impacts on neighborhoods, Baltimore has worked on several innovative initiatives to take more local control over housing practices and their impacts during the past several years. The Department of Housing and Community Development issued a framework for community development in 2019 that expands resources to all communities through new funding mechanisms such as the Community Catalysts Grants and the Neighborhood Impact Investment Fund.

A Difficult Year for Crime

The indicators presented in Vital Signs 17 detail the overall crime and safety trends within the city and the variation across its communities. It is important to recognize the context for many of the statistics presented in this chapter; the individual narratives of Baltimore’s communities vary and each area faces its own unique challenges or successes. The resiliency of each community is dependent on ability to adapt to changes in the community, new policies in policing, and collaboration around shared goals for safety and improved quality of life.

Violent crime in the city remains a pressing problem:

BNIA-JFI also hosts an annual workshop, Baltimore Data Day, in which community leaders, nonprofit organizations, governmental entities and civic-minded “hackers” come together to analyze the latest trends in community-based data, technology and tools, and learn how other groups are using data to support and advance constructive change. This year’s workshop will take place on July 13 on the University of Baltimore campus. Details will be announced shortly.

BNIA-JFI began in 1998 as a partnership between the Annie E. Casey Foundation and the Association of Baltimore Area Grantmakers. In 2006, BNIA joined with the University of Baltimore’s Jacob France Institute in an expansion of its capabilities. BNIA-JFI has strengthened the Vital Signs report and provided additional services and resources for those who seek data, information, and analysis about the city.

The complete Vital Signs reports, along with a separate executive summary, data, maps and other research by BNIA-JFI, are available here.