No Such Thing as “Ideal” Homeownership Ratesby Charles Karpati

by Charles Karpati on October 9, 2020 with 0 comments Uncategorized 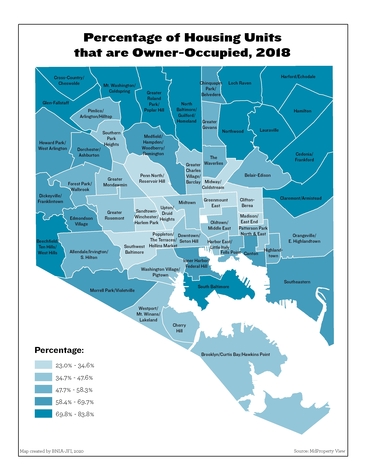 There is No Such Thing as “Ideal”Homeownership Rates:
But Every Neighborhood Still Needs to Ensure Equitable Pathways to Homeownership

The report identified clear recommendations for the City, housing non-profits/advocates and other institutions involved in funding and promoting homeownership, particularly with a goal of increasing Black homeownership and reducing continued racial disparities.

But after the report came out, BNIA started to get a lot of queries from neighborhood residents and leaders about what the “ideal” rate of homeownership might be, presumably as a way to set some goals and priorities for their community. The answer, of course, is that there is no such thing. We have perfectly sustainable and healthy neighborhoods in Baltimore with a broad range of ownership rates.

What the Vital Signs indicators show is that the current percentage of homeownership in any community does not alone represent a sign of sustainability; rather, it’s about how stable or fast-changing that percentage might be.

Take for example neighborhoods like Midtown or Greater Charles Village which have below-average owner-occupancy (41% and 42% respectively) and have been steady at those levels for more than a decade. What can other neighborhoods learn from areas like these?

We have started to recommend for any neighborhood that already is or is approaching less than 50% owner-occupancy, initiate a process to engage the community about the pros and cons of becoming a Community Benefits District.

Fast-changing owner-occupancy rates in a relatively short timeframe causes the character of a neighborhood to change in a way that neighbors can’t get a hold of. This is what is happening in those neighborhoods listed above. Some other neighborhoods like Belair Edison and Edmondson Village also have declining owner-occupancy and ironically increasing rent burden where more renters are spending more than 30% of their income on rent. That’s a problem that potentially a focus on increasing homeownership might help on multiple fronts.

So our message to neighborhoods is to use data to get “tactical”🎯 and more specific on how to set clear goals in the hopes of equitably increasing homeownership in the neighborhood. Here are just a few ideas to get your neighborhood started:

5 Things Neighborhood Can Do to Increase Homeownership Equitably

These are challenging times in Baltimore, but communities in Baltimore are still doing the daily work of keeping their neighborhoods strong and resilient. We hope these strategic, tactical and manageable recommendations will help with not only neighborhoods’ homeownership goals, but more importantly with increasing equitable housing security for everyone.