Mayor Stephanie Rawlings-Blake announced Grow Baltimore in December 2011 with the goal of increasing Baltimore City’s population by 10,000 new households by 2020. In partnership with the Goldseker Foundation, the City aims to target retention strategies using data on former and current residents. Several City agencies and community partners have been working towards this goal independently through their strategies, services, and programs. However, there is a need for a coordinated overarching strategy to achieve the Mayor’s goal of achieving sustained population growth. The Goldseker Foundation funded BNIA-JFI to produce actionable information for the Mayor’s Office, city departments, and local nonprofit organizations to further the Grow Baltimore initiative. An advisory committee formed in 2014 and meets approximately every six weeks to insure that the work proceeds in collaboration and partnership with key stakeholders who will implement policies to more effectively retain Baltimore residents.

Three part series on BNIA-JFI’s Grow Baltimore Research
The purpose of this series of briefs is to help all stakeholders in Baltimore (public agencies, foundations, businesses, community organizations and residents) understand the trends that are already working to attract new residents to Baltimore and better identify the reasons why people are moving out. 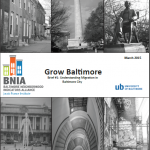 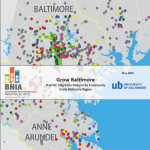 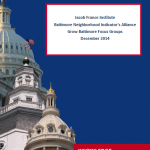 Flow Baltimore Homeowner Migration Analysis System
The migration pattern, based on many individual decisions, is a complex phenomenon. Specialized visualization and analysis tools can help community stakeholders discover trends of where residents from their communities are moving. BNIA-JFI has developed an interactive website of homeowner migration data called Flow Baltimore. This migration analysis system permits examining the number of households moving to, from, and between specific communities as well as home characteristics such as price, year built, and square footage.