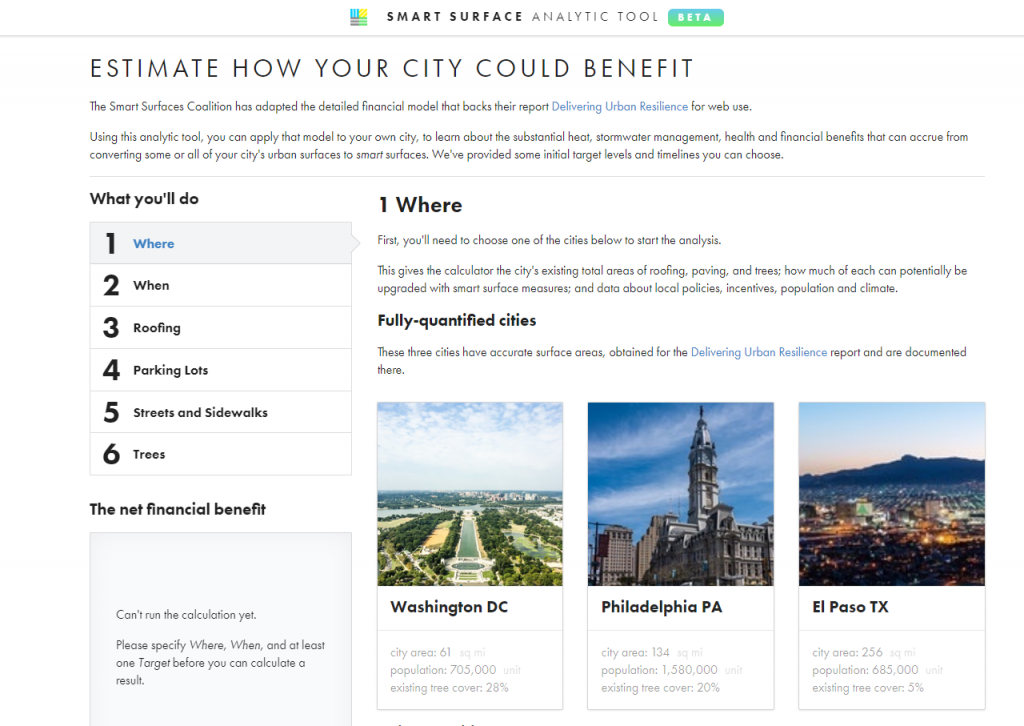 The national Smart Surfaces Coalition (SCC) partnered with the Baltimore Neighborhood Indicators Alliance (BNIA) to provide Baltimore policymakers, neighborhoods and advocates with a powerful new tool to promote livability and resilience. Through the tool and focused community engagement, SCC and BNIA aim to encourage the use of practices such as green roofs and trees, and reflective pavement and roofs, collectively known as “smart surfaces,” in support of improved local air quality and reduced heat impacts.

The partnership helped create a customized, cost-benefit analysis—a “smart surfaces” tool—for Baltimore available for anyone to model and understand benefits of smart surface adoption for the City of Baltimore. Already, temperatures in Baltimore are high because of the urban “heat island” effect. Cities have a high concentration of dark, heat absorbing surfaces—like buildings and pavements—and less green space. A study of Baltimore recently reported on by NPR mapped the relationship between heat and neighborhood income and found that the temperature of low-income neighborhoods can be as much as 10 degrees hotter than wealthier areas—on top of city-wide excess summer heat.

The work by SCC and BNIA, funded by the Abell Foundation, aims to reduce existing structural inequalities prevalent in low-income neighborhoods—such as heat absorbing pavement and diminishing green space, which contribute to increased smog, higher temperatures, and negative long-term health. SSC and BNIA are collaborating to address these concerns by providing community organizations with tools to quantify and analyze impacts and scenarios to better shape their future and a robust economic argument for adopting smart roofing and surfacing technology.

BNIA helped identify the initial 3 communities for the pilot based on data such as Percent of Area Covered by Trees and the square footage of pavement and building footprints in each neighborhood, that points to priority for urban heat island effect

What are Smart Surfaces?

Smart surfaces are a set of surface technologies that allow cities to better manage sun and rain. These surfaces include:

For questions about the Smart Surfaces Coalition, go here. For more information on the smart surface cost benefit analytic engine, go here. For further questions on either, contact Rob Jarrell at [email protected].

About the Smart Surfaces Coalition

Launched in February 2019, the Coalition is a partnership of 35 organizations including the American Public Health Association, National League of Cities, U.S. Green Building Council, and American Institute of Architects that has developed an online cost-benefit tool to promote the rapid adoption of smart surfaces. Their research show that the city-wide adoption of smart surfaces in the cities of Washington, D.C., Philadelphia, and El Paso can strengthen city resilience, improve health and livability, reduce urban inequality, and slow global warming while saving billions of dollars.